Introduction of working with struct

Introduction of working with struct

Before C# 7.2 and .net core 2.1, you could improve .net performance with a good dose of conscious effort and relying on code that would not necessarily be nice to look at (and certainly maintainable). Microsoft made several improvements to make sure that you could design & write faster code, not at the sake of the good practices.

It is important to get rid of this reflex of choosing the class keyword every time you design a new type.

Question yourself about if object-oriented programming is really necessary or if you should use another paradigm that would be more data driven.

Using struct has game changing advantages: You don’t directly allocate on the heap, so you’re not using the GC.

You can design a memory friendly layout for your type, avoiding many memory indirection that would increase the chances of cache miss!

Before C# 7.2, relying on struct were not necessarily a performance win, the reason was that each time you passed/return a struct based object: a copy would be made, on the stack, but still a copy is a copy: it takes time!

It is now possible to pass/return struct based objects using reference to the initial object: avoiding an unnecessary and costly copy.

Two know languages keywords ref and in enable many new patterns to speed things up!

So we have a total of 1 + 256 + 2*256 objects allocate on the heap: 769 objects, each located somewhere in the memory, that will be eventually garbage collected when no longer needed.

Let’s make the following changes: we no longer use class, but struct instead.

Ok, this is a naive explanation, internally .net will make things a bit different, but you get the point:

A foreach on the class version with access to all the fields would have lead to deal with 769 distinct memory locations, with a CPU that would have hard time to prefetch to reduce the time to access the data.

A foreach on the struct version with access to all the fields would be as fast as it could be: there’s one memory block, the CPU understand pretty quickly that we’re sequentially accessing the data, so the prefetch and cache loads are very efficient, because everything was design for this!

Benchmark of class versus struct

I’ve created a small project in order to demonstrate what was explained above, you can go grab it and play with it or just keep on reading.

There are two implementations of a simple program which has to deal with a Financial Stock, containing a list of Trades, each Trade also contains a list of Tickets.

Diagram of the class version

Diagram of the struct version 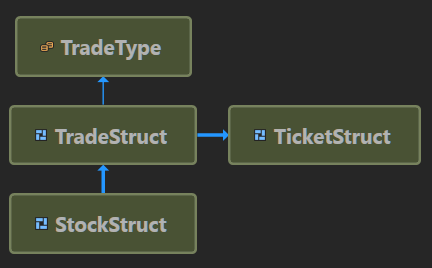 (don’t mind about the TradeType enum, it’s not important here)

The program file is fairly simple:

The program creates the class version and the struct one.

We are going to bench an operation that will compute the average buy price and average sell price for all the Tickets.

In other words we parse the whole tree hierarchy of instances and perform basic computation on it.

Let’s be clear: this benchmark is not including the construction of the objects, this is done in a setup phase that is not benchmarked. Here, we are only profiling the computation of the average prices.

So why is this 4 times faster considering the fact we’re not creating objects, only parsing them? Well the reason is the one explained in the first post of the series: struct are more memory friendly.

Memory layout for the struct version

In the diagram above, each color represent a memory location.

What is important to understand is:

In our case there’s 1000 Trades objects that are in a contiguous memory location: this is very memory friendly!

In the program, on average there are 5 Tickets per Trade, it is also apparently enough to be memory friendly.

We could have pushed things further and store all Tickets for all Trades in the same array, but things would be a bit more difficult, let’s keep it simple for now.

Memory layout for the class version

Well, no need of color this time, each object is stored in a distinct memory location, determined by heap manager of the .net CLR.

What is important to understand here is:

A design choice to make

Again, there are no silver bullet: to gain something you have to give up something else in return.

In our case this more about a design decision to make:

There’s a saying out there which warns every programmer:

“Early optimization is the root of all evil.”

This is a simplified version of a quote from the great Donald Knuth:

“The real problem is that programmers have spent far too much time worrying about efficiency in the wrong places and at the wrong times; premature optimization is the root of all evil (or at least most of it) in programming.”

Early optimization is not the root of all evil, most of the time, it will be for sure. Optimizing something that won’t worth it is one of the biggest mistakes we all did (and still do, because, you know, it’s fun, it’s challenging!).

However, there are some profound design choices that have to be made from the start, because after, it will be too late!

Ok, that’s all for this post, in the next one we will take a closer look at the code, how to design and program things in order to achieve better performances!

As Marko Lahma pointed out in the comment, the class/struct benchmark is not a fair one, I rely on foreach for classes, because, well, daily habits. This is what generated the 2040 B of Allocation and the Gen 0 GC. The speed difference was bigger than I expected, but mainly because the test is doing pretty much nothing in the nested for/loops (and the GC surely impacts overall performances).