I’ve spent too much time the last few days to make D3DX working with Irion.
The library is static, and doesn’t like our custom new/delete operators. The bug is not solved yet (appears to be a problem on the Microsoft’s side), but I temporary bypassed it.

Big big thank to Greeg Peeper from Microsoft for his help and support!

HLSL and D3D .FX roxx
It eases and speeds the work so much. I had several problems (still the mysterious D3DX bug) to compile/open a .fx file in my project, but I guess it only happens to me…

So I started a new Renderer project (IrionSM3Renderer)
Ripped a lot of the code from the IrionDX9Renderer one (Vertex Buffer and other D3D resources creation and maintenance).

Let’s go for the Deferred Shading.

2) Program the following rendering passes:
• Rendering into the MRTs. Nothing complex, except a little detail I explain below.
• Do the lighting, for each light I parse the MRTs, computing the lighting for each pixel and accumulate the result in a D3DFMT_A16B16G16R16F buffer (why bother).
• Display the accumulation buffer by copying it in the back buffer (have to take care of few things to make the 3D GUI Helpers still rendering with the standard path).

As usual, I had few matrices issues, and I also didn’t realised that storing data in the Rendering Target can only be in the [0, 1] range and not [-1, 1] (like the normals…).

All the data are transformed into the camera’s space, I can reconstruct the Normal ’s Z (Z = sqrt(1-X²-Y²)) as I don’t mind about the sign of the vector (always positive in camera’s space).

That’s all for now…Diffuse and Specular lighting is done, with a basic material.

I modified the Test3D program
to be able to switch on the fly between the DX9Renderer and the SM3Renderer.
It’s great, I can see the differences instantaneously! 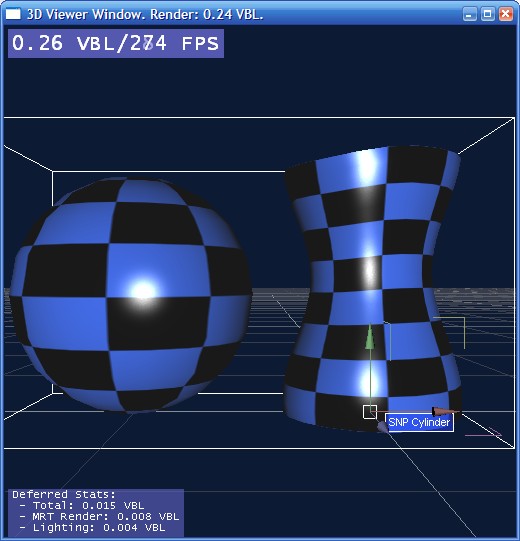 Note: the lighting is not the exact same one because I don’t take into account all the material settings. The specular is not at the same place as the FFP version, I think I’ll figure it out later. 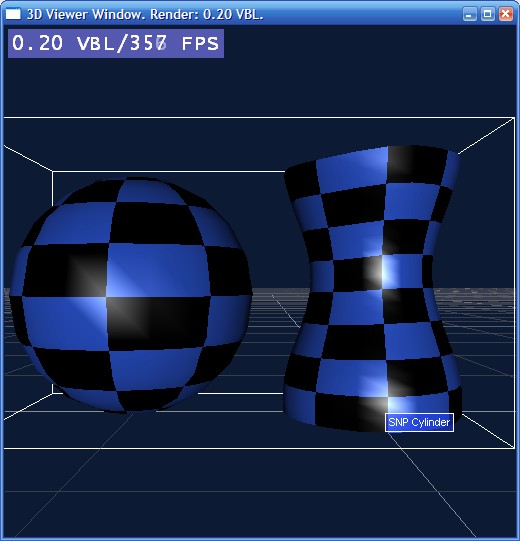